Greater Sudbury Hydro (GSH) distributes electricity to 47,000 homeowners and businesses in the City of Greater Sudbury and the Municipality of West Nipissing in Ontario. In 2017, Greater Sudbury Utilities, GSH’s parent company, launched an innovation office known as The Workshop to help drive digital transformation in all areas of the business. The goal: to help all branches of the organization do business more efficiently and sustainably for the long term by leveraging platform technologies and capabilities, including the geospatial cloud. But digital transformation can’t take place without people to power it. When it came to transforming the utility’s field inspection process, it was a 30-year veteran of GSH, Doug Levesque, who championed the effort. Doug, the GIS workgroup administrator for the utility, had already seen several hardware transitions, but the move from paper to digital was a long time coming.

Every year, GSH performs a program of inspections required by the Ontario Energy Board (OEB). These inspections cover at least one third of the distribution system and include all the utility’s assets for that area. In addition, the OEB mandates that all electrical substations be inspected monthly and that all vaults be inspected yearly. This program of inspections is audited annually by the Electrical Safety Authority (ESA).

It’s important to keep in mind that GSH only has one inspector regularly performing inspections for most of the assets, while the substations department reviews only the substations and vaults.

In 2018, despite being a long-time user of GIS, GSH was still driving many field activities by working on paper. Their GIS team would print maps of areas with assets in need of inspection on up to 200 “D” sized (22 x 34-inch) sheets of paper per inspection area. The inspector would go into the field and perform inspections, noting any defects using different colours of highlighters. The inspector would only write inspection reports for defective equipment, marking assets in good condition with green highlighter and leaving it at that, with no record of inspection on the assets that were in good condition.

Doug had been trying to transform this labour-intensive process—for his team’s benefit as well as the inspector’s—for about 15 years. His team had tested a hand-held hardware device as well as in-house software but had faced issues with obtaining buy-in and maintaining these more complex tools.

“By engaging with staff and demonstrating the positive impact that a shift toward digital could have across the organization, I witnessed a change in the way people were thinking about the future of our assets. Everything from switches to transformers, conductors and poles—the list is endless, really—was being seen through a digital lens.” —Doug Levesque, Greater Sudbury Hydro

What GSH needed was not a complex asset management software package, but an easy-to-use, straightforward set of tools that could simplify data collection as a first foray into digital. Given that most of the inspections were performed by one person, and given that any location-enabled solution was completely new to the team, the solution had to be easy to learn and use. At the same time, GSU also wanted to be able to turn their data into readable, actionable information to help leadership make decisions.

When GSH founded an innovation office known as The Workshop, which the GIS group now reports into, Doug was finally able to secure the buy-in he needed to digitize GSU’s field inspection process. Getting the inspector on board was straightforward. However, getting supervisors and operations staff on board was more challenging and required securing “try-in” that led to buy-in. In other words, they needed to learn the benefits of the new solution by using it first.

GSH piloted their new Esri-powered data collection system in 2019. Following their cloud-first implementation approach, this new inspection process is enabled by ArcGIS Online and uses several simple apps chained together. The process is designed to be expandable so that as field and office staff become more comfortable with the technology, more field and management apps and dashboards can be bolted on as needed.

The main app that GSH uses for field data collection is ArcGIS Collector, run on a cell phone or tablet. Using Collector, GSH’s inspector notes the defects as well as the assets in good condition using a colour-coded system. 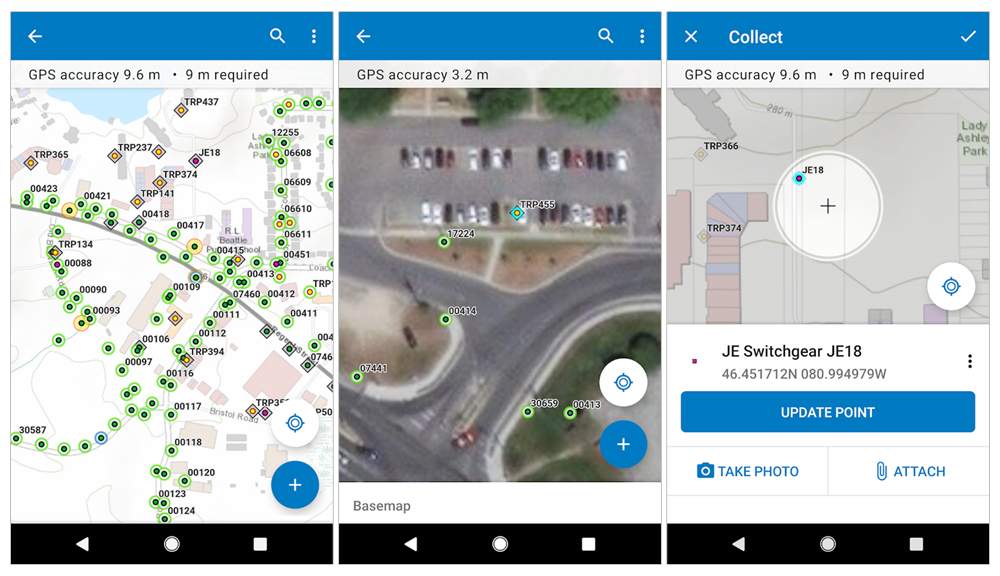 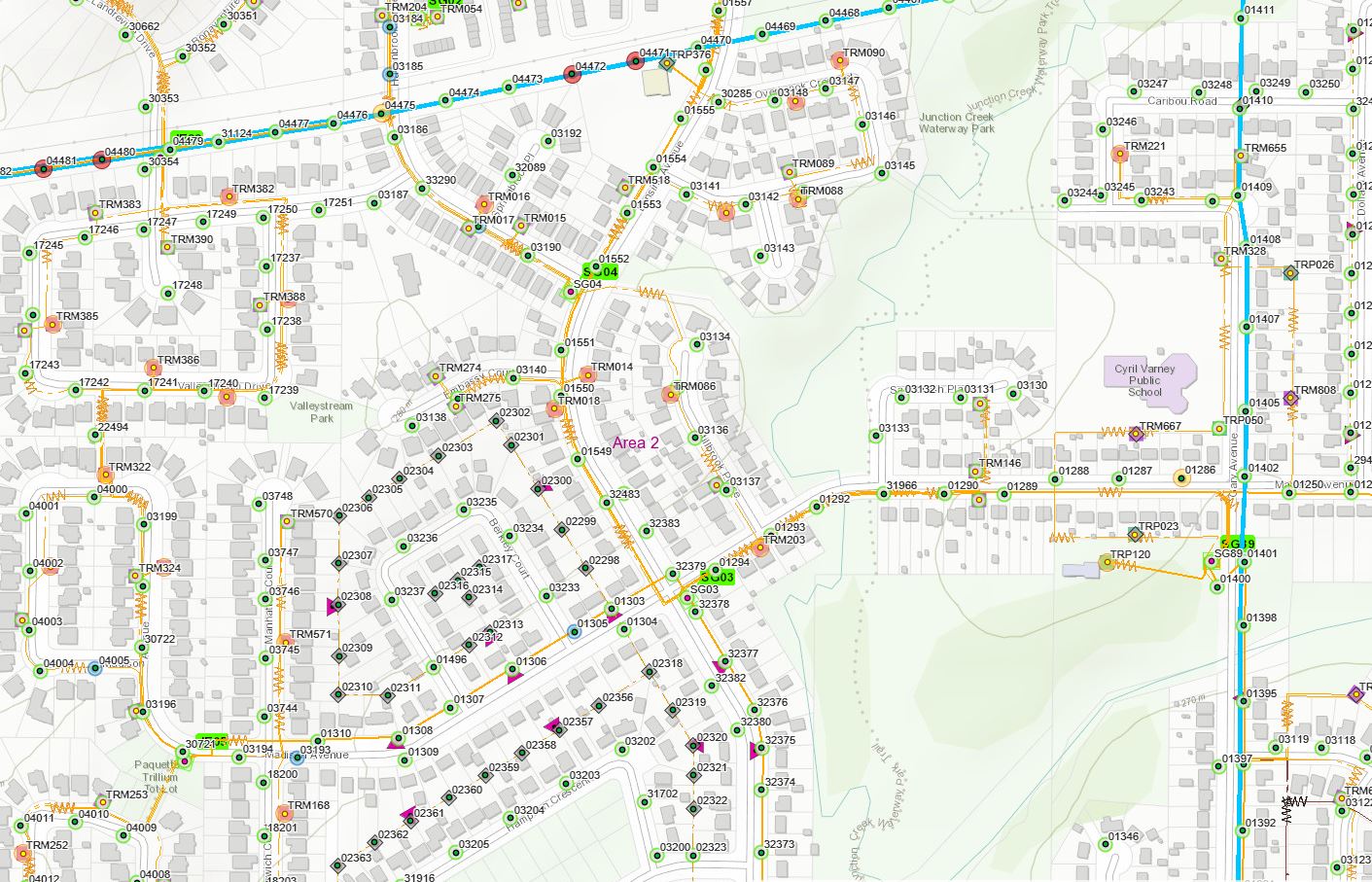 In GSH’s previous paper-based workflow, defects were marked on a map using a pink highlighter. Assets in good condition were marked in green. Switching this process to the ArcGIS platform has enabled the inspector to capture more detail with less effort. On GSH’s ArcGIS Dashboards, which are fed by Collector, major defects are highlighted in red, minor defects are noted in yellow and defects repaired on inspection are in blue. Green indicates that no defects were found.

Instead of requiring their inspector to sift through 200 sheets of paper looking for the next map section to work on, Collector uses GPS to track the inspector’s location. A dated and timestamped record is created for each inspected asset, not simply for defective equipment.

“Now, the good, the bad and the ugly are recorded in the inspector’s phone,” says Doug. 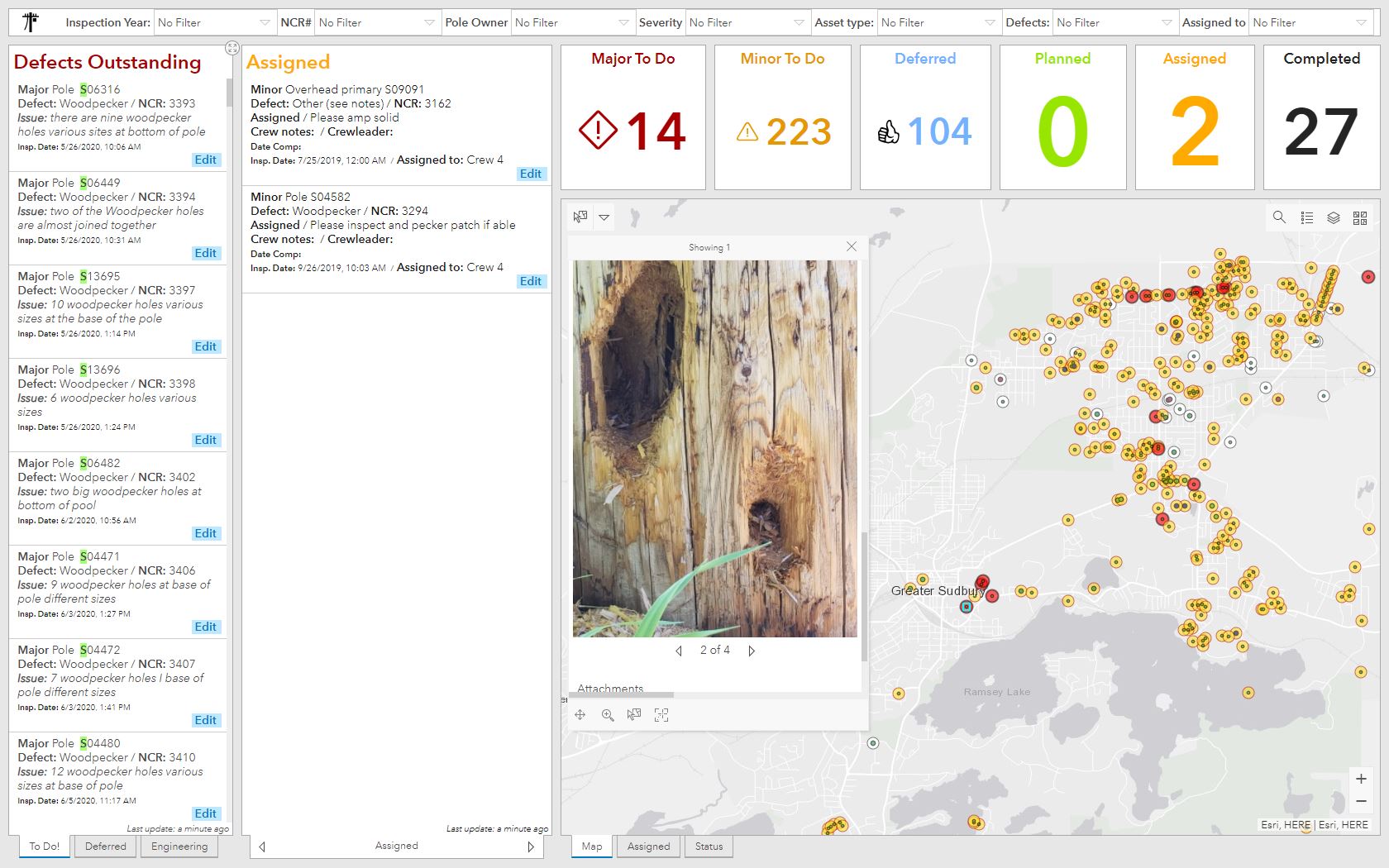 The Operations Dashboard captures OEB defects found. It gives supervisors a visual of outstanding, planned, assigned and completed inspections with links to edit the records in an ArcGIS Web AppBuilder data manager app.

The information gathered in Collector feeds GSH’s ArcGIS Dashboards. The utility’s engineering and operations departments use these to stay informed about the inspection status and condition of third-party assets, and operations for GSH’s own assets, respectively.

The information also flows downstream. Once processed through the dashboards, defects can be assigned to repair crews by supervisors. The defects show up in a crew-specific ArcGIS Online map. This allows supervisors to assign jobs based on the current location of a given crew, or plan future jobs based on priority. 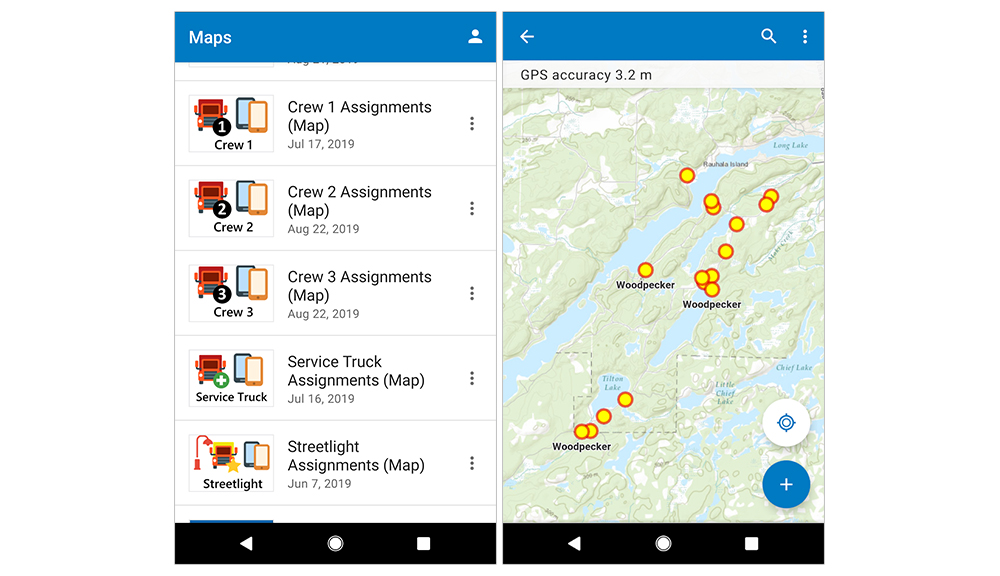 GSH maps assignments in ArcGIS Online so that supervisors can easily assign crews to jobs based on their current location.

Using the ArcGIS platform makes it possible for GSH to track, query and filter their inspection statistics easily. They can also track repairs completed at the time of inspection. None of this was possible using the previous paper-based system.

GSH’s inspector is also able to use ArcGIS Workforce to collect spot data and receive work orders. This has been essential during COVID-19, as GSH’s work has not slowed down. Before the pandemic, the inspector and the GIS team worked out of the same office, meaning the GIS team could simply assign new inspections by talking to the inspector. Now, Workforce allows the team to give and receive new work while maintaining safe social distancing. 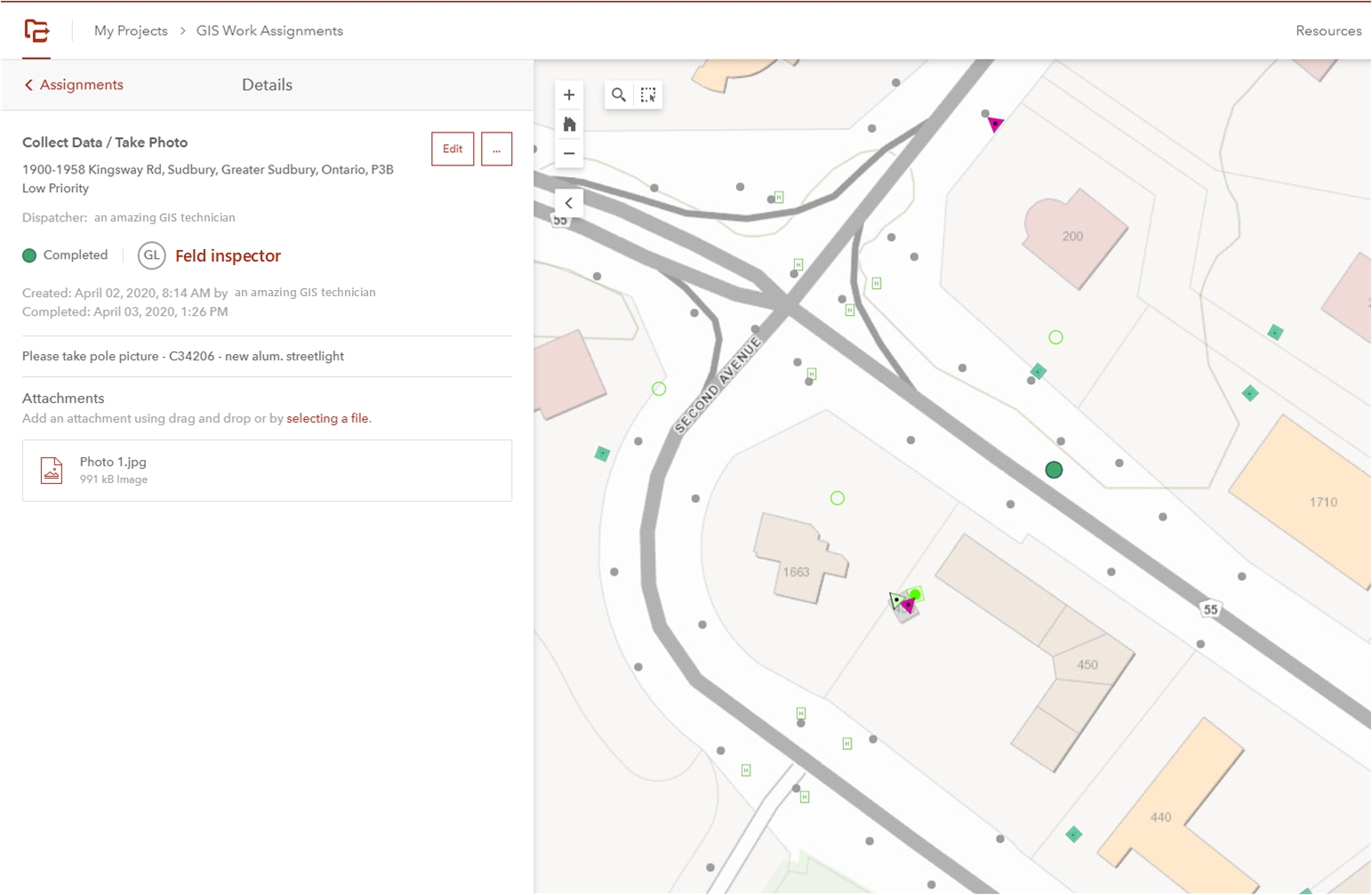 ArcGIS Workforce allows GSH’s inspector to see on a map where spot data needs to be collected.

“After 15 years of attempting to transform this multi-step manual process into one that is digital, we’ve successfully taken the leap of not only eliminating a great deal of paper, but saving the utility well over two months of inspection hours and administration.” —Doug Levesque, Greater Sudbury Hydro

A year into using this digitalized process, Doug says that “at every stage, things have improved”. Inspecting an area of the distribution system takes two-thirds the time it used to. GSH’s GIS group is providing dashboards to its supervisors and crew leaders, significantly streamlining their work and improving their situational awareness. There’s less prep work required to send the inspector out into the field, and GSH will also be able to get a head start on inspections in the springtime once the cold weather has cleared.

GSH’s ESA auditor also benefited from the new system: this year’s audit was done entirely virtually and all information was available to the auditor in seconds.

GSH has also been using the capabilities of the new system to better narrow down problem areas they couldn’t before. For example, damage from woodpeckers is a major problem for GSH’s hydro poles. Now, with a few clicks, GSH staff can create heat maps of woodpecker damage, showing the areas of the system where the problem is at its worst. 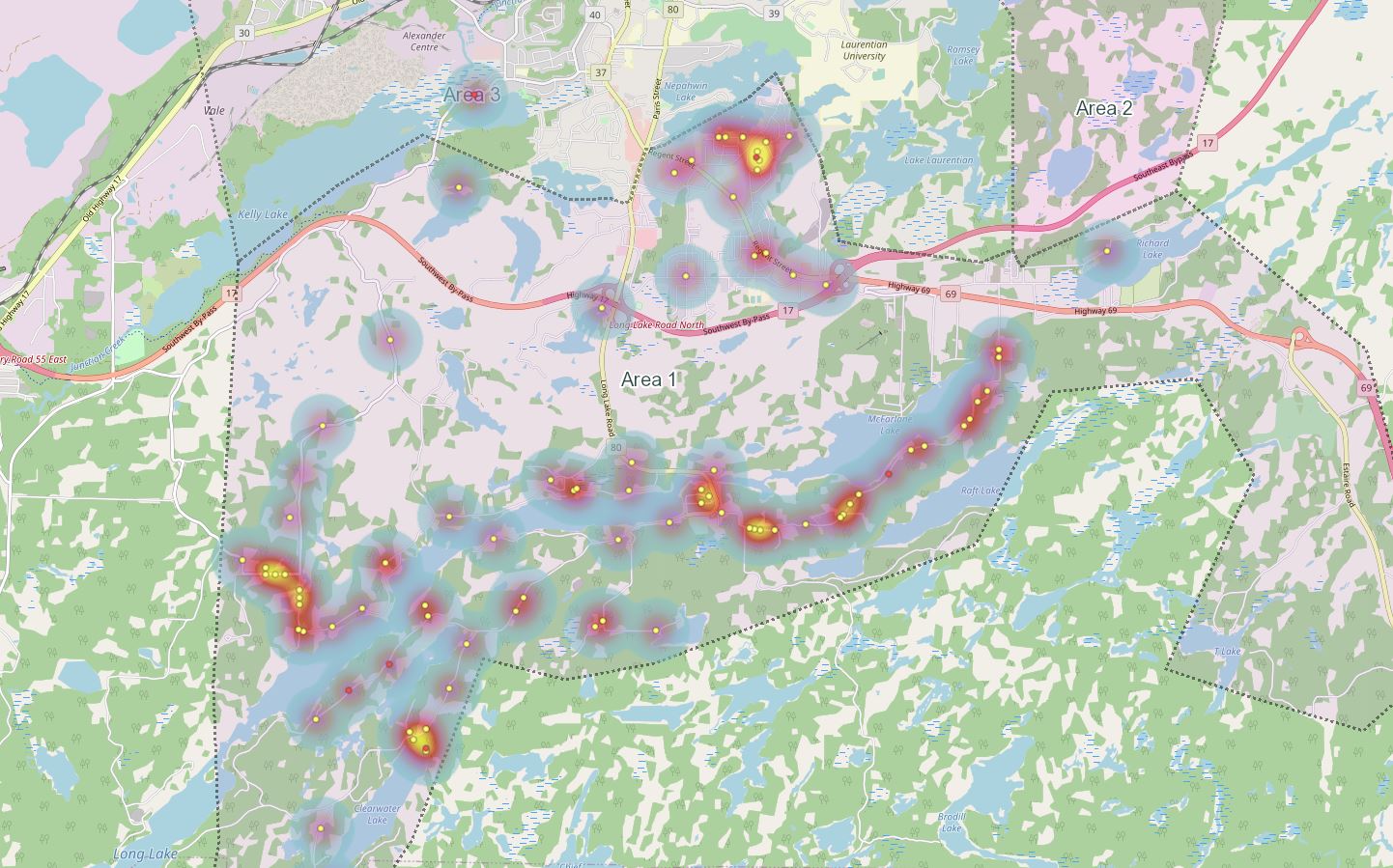 A sample heat map showing damage caused to hydro poles in GSH’s service area by woodpeckers. This map was generated in a few seconds using filtering—something that had previously been impossible in a paper-based system.

Now that the inspection and GIS teams have gotten accustomed to working with this set of easy-to-use tools, The Workshop is brainstorming other ways to extend ArcGIS Online and provide more services to fieldworkers and crew leaders while building resilience and increasing adoption. They’ve already identified opportunities to integrate GeoForm, ArcGIS QuickCapture and ArcGIS Survey123 into the utility’s operations. There’s also talk at GSH of using new hardware, like EOS Arrow Gold GPS receivers, to achieve sub-metre accuracy.

In the end, using a geo-enabled solution means GSH staff can work faster with less effort, and that they can gather higher-quality, more usable data. For all the effort it’s taken to get everyone on board, it’s clearly been worth it for GSH, now living proof that small steps towards a larger digital transformation effort can lead to huge improvements. 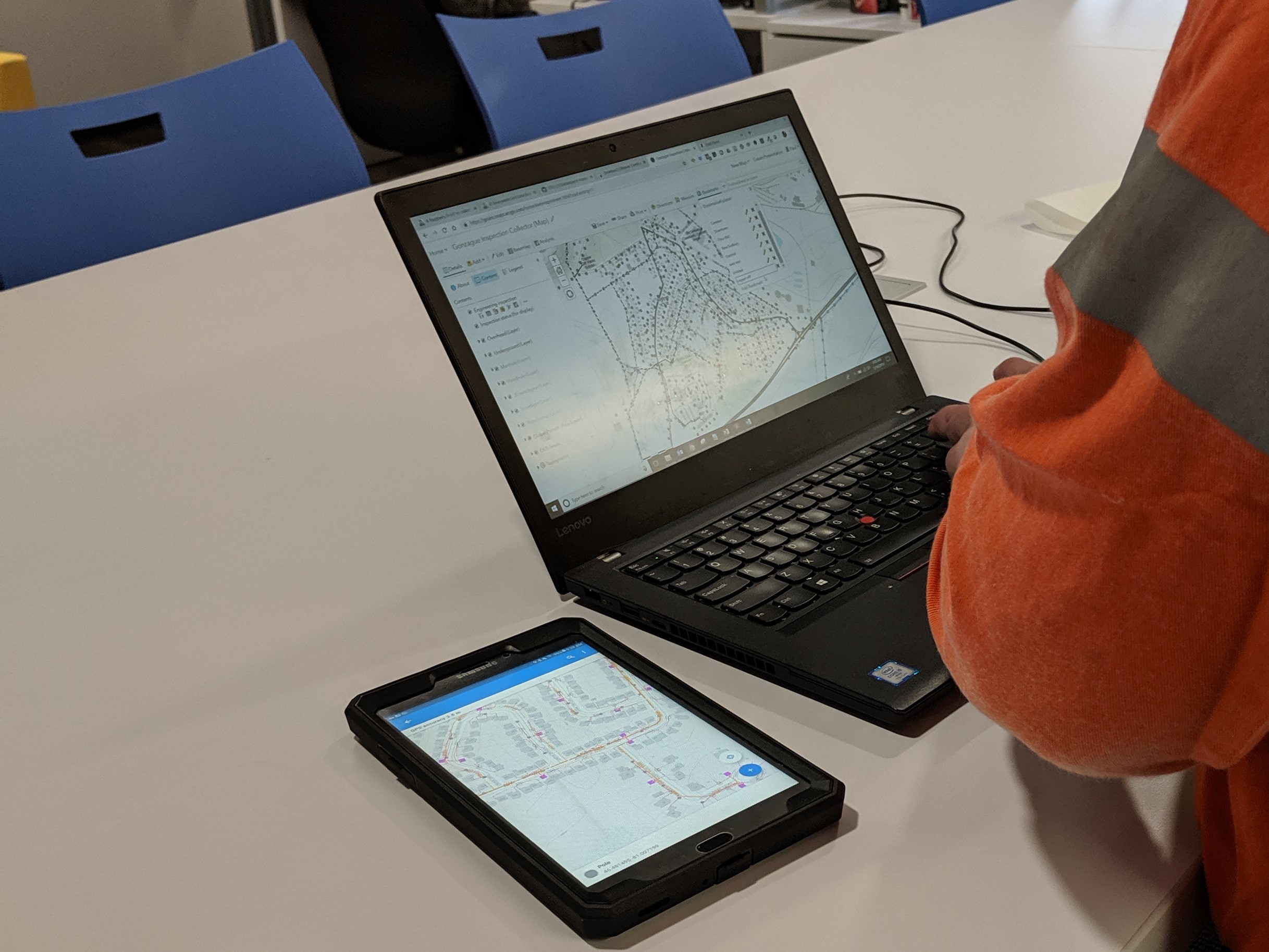 An inspector works on fine-tuning his Collector maps in GSH's The Workshop.