No longer does finding information about your community require heading down to the library to sift through hundreds of books and thousands of pages or calling your town or city hall for that one tidbit of information. The rise of the Internet and open data has certainly made access to information easier. Let’s take a look at how the City of Kitchener in Ontario provides accessible municipal data with May’s App of the Month, Kitchener GeoHub.

Open data is defined as datasets that can be freely used, reused and redistributed by anyone. To many, data is very valuable. It can represent the livelihood of an organization and is sometimes worth millions of dollars; it can even be critical to the safety and security of millions of lives. So, what can the open and free sharing of data really achieve? In many cases, it’s a way of supporting community engagement and enhancing government transparency and accountability. It also promotes innovation and collaboration by allowing the public to use the data to produce great apps, maps and analyses.

The City of Kitchener joins nearly 2,400 organizations worldwide that are sharing open data through Esri’s community engagement solution, ArcGIS Hub. Holding a total of 128 datasets, Kitchener GeoHub serves to make information accessible not only to GIS professionals, but to people from all walks of life. Ranging from base data like roads and rivers, to the locations of hockey arenas across the city, the GeoHub is filled to the brim with tons of spatial and non-spatial datasets useful to a broad range of people. 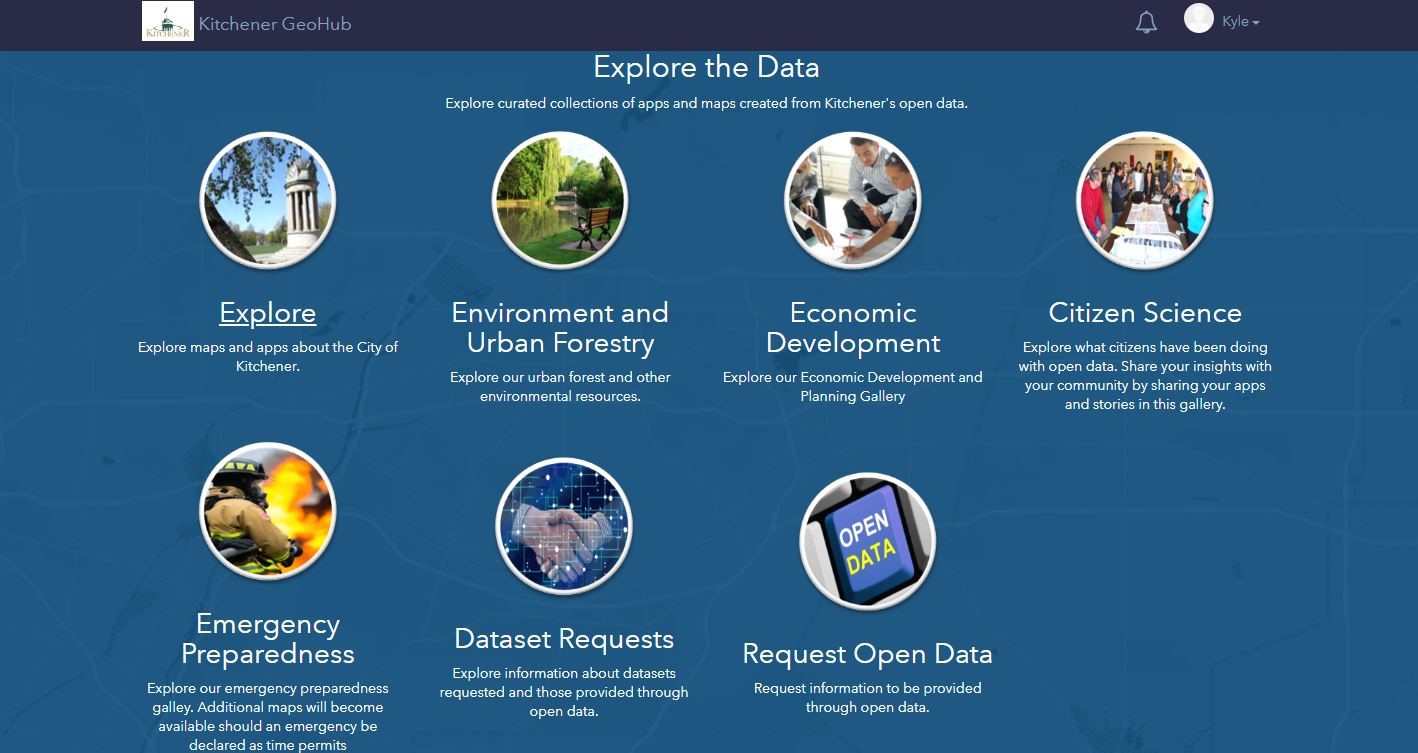 Open data is an important part of the democratic practices of any government. Making data available freely and openly improves transparency and can aid in gaining public trust. Efficiency and effectiveness of government services can also be improved through the establishment of open data practices by consolidating data and ensuring its quality.

ArcGIS Hub might seem like a simple site holding data, but it really does go much further beyond that. Its real value is in its ability to go beyond open data to enable collaboration—between government, its partners and especially its people.

Kitchener GeoHub makes collaboration with surrounding municipalities quick and easy. The City realized their residents like to work together beyond their own individual boundaries and reached agreements to link their open data site with data from the nearby Cities of Waterloo and Cambridge, as well as the Region of Waterloo.

And it’s not just residents who benefit from this collaboration. Open data through ArcGIS Hub promotes a two-way exchange of information. With data being made available to the public, people have the opportunity to visualize this data as maps, perform analyses on it and create applications that allow others to further use the data and analyses.

Kitchener subsequently benefits from the creation of applications. Kitchener GeoHub includes a Citizen Science Gallery that highlights apps developed by residents using the data made available in the Hub. Fruit-tree locations, re-urbanization and maps of Smart Growth in the city highlight what the public have come up with using the municipality’s data. 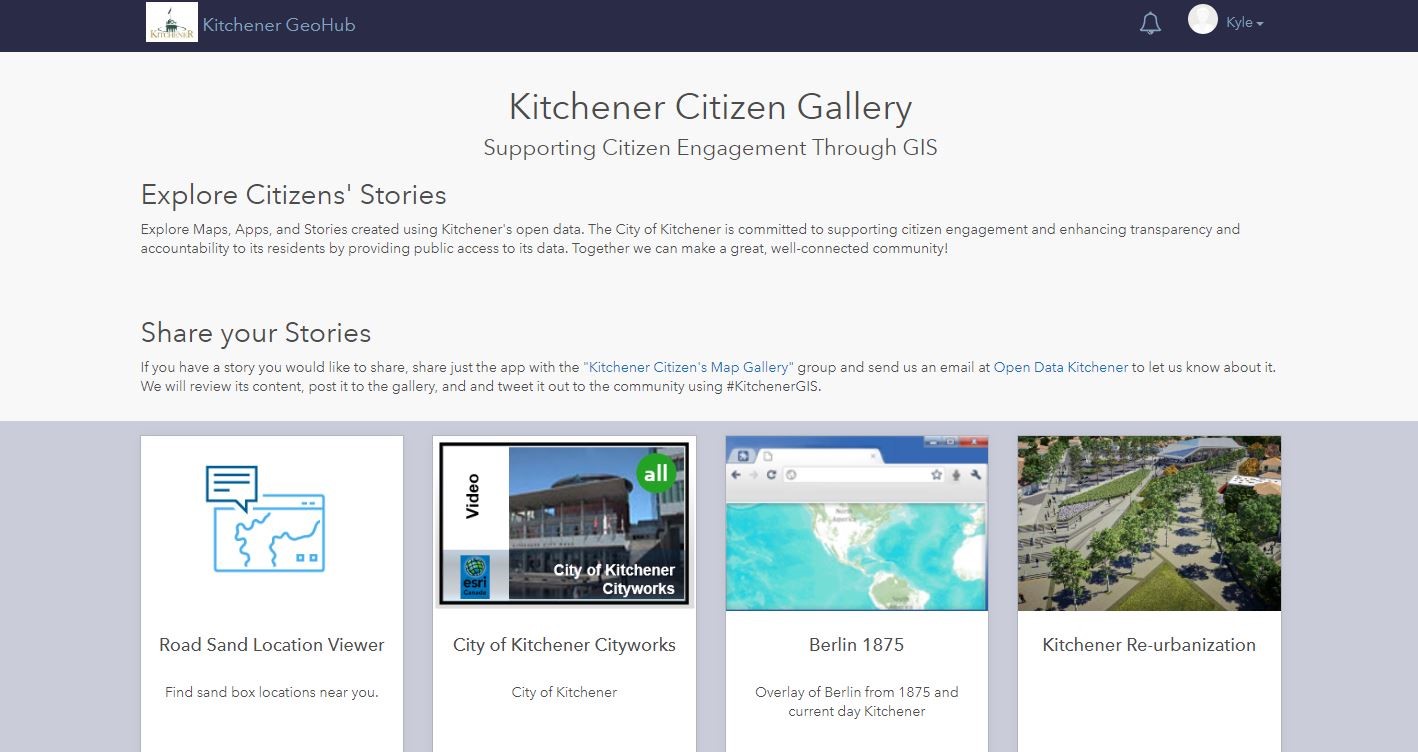 The Citizen Science Gallery features contributions of the public using data from the GeoHub.

Personally, I spent a lot of time exploring the App Gallery and checking out all of the different apps that use Esri Story Maps, Web AppBuilder and Operations Dashboard for ArcGIS. The apps look great and are super functional too!

If you’re a Kitchener resident, you’ll find valuable information like Leaf Collection Areas, which show you when leaves will be collected in your area during the fall season. The Parks Story Map does a great job of showing off all of the parks, playgrounds, trails and sports fields in the city. It even has a locator, where you can input your location, and it will show all the parks and facilities nearby.

As a person who commutes by car to work, I found the Road Closures App to be very useful. I wish I could use something like that to plan my own drive to work! My favourite though is the slick Operations Dashboard for Current Building Permits. It shows the location of building permits, along with visuals of the total numbers, permits issued by year, construction value and permit type. It’s dynamic, and the statistics change to reflect what’s in the map’s extent. It is cool to use and definitely is a value-added service to citizens as the app helps them get a glimpse into what’s going on in the development of their city. 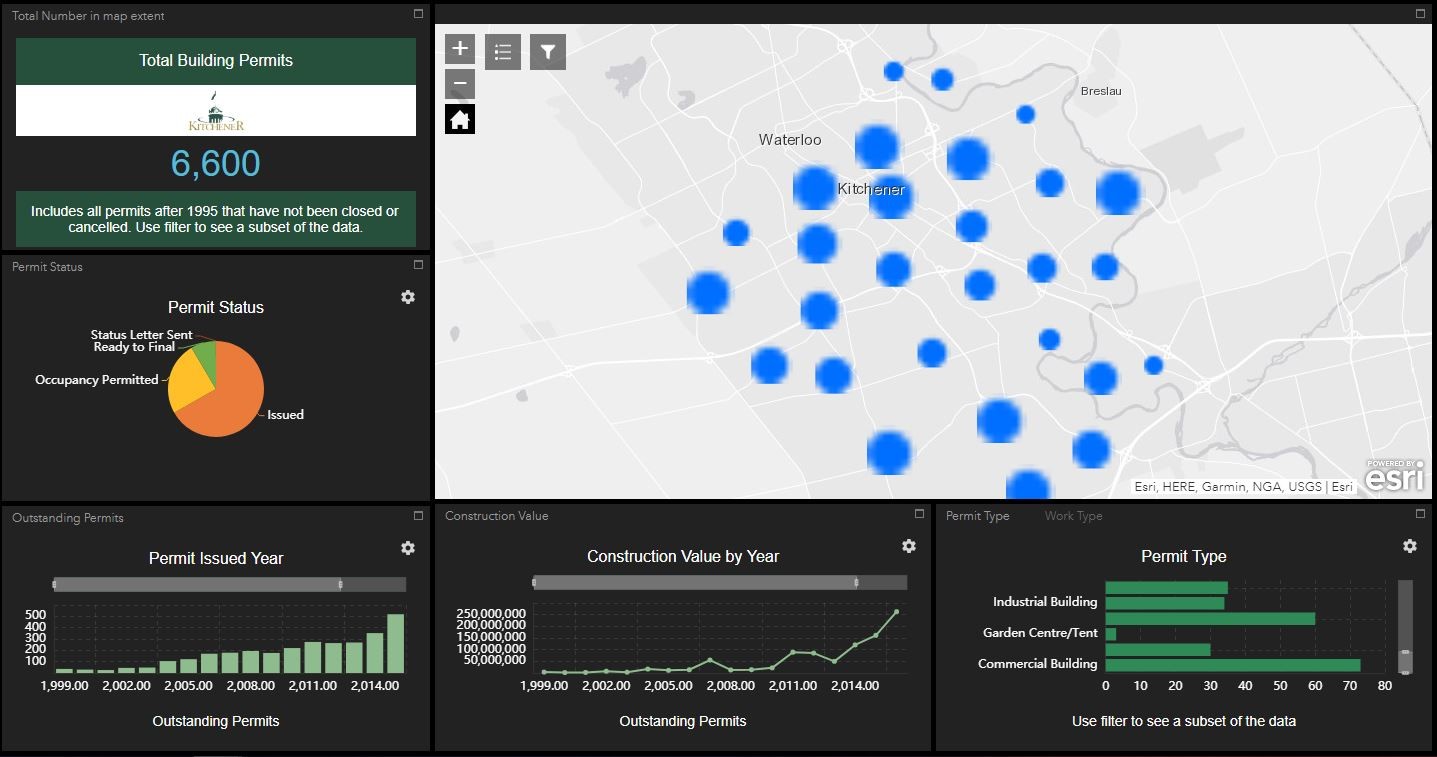 I am super excited that many different organizations are buying into the idea of open data. Its benefits are seen both by the public and the facilitating organization. As a GIS professional, it is really great to see all of this data being made available in easy-to-use formats. It makes our job so much easier!