The City of Barrie integrates ArcGIS Collector and Cityworks for a complete pothole maintenance solution.

“One of the most valuable pieces of this new solution is our ability to pinpoint the exact day and time a pothole was repaired, which ensures we are meeting the Provincial Minimum Maintenance Standards for Municipal Highways and protects us and the City from litigation.”
— Dave Friary, Director of Operations for the City of Barrie

Given our generally cold and often wet weather, Canadian municipalities are inevitably challenged by potholes. Road departments across the country must manage the identification and repair of thousands of potholes per year. The City of Barrie is no different. In 2019 alone, the City of Barrie patched over 17,717 potholes. To improve their performance of this unending but very necessary work, the municipality knew they needed a complete pothole maintenance solution. To realize this solution, the city integrated their central asset management system, Cityworks, with ArcGIS Collector, which the Roads Department uses to track information on work orders in the field.

The City of Barrie is a medium-sized municipality in central Southern Ontario. A growing city, its current population is 148,000, up from 62,000 in 1990 and projected to grow to 250,000 by 2031. It is located on the traditional lands of the Anishnaabeg at the wester most tip of Kempenfelt Bay, also known as Lake Simcoe.

Pothole management requires coordination and communication between multiple parties for identification, prioritization and repair. In Barrie, approximately 90% of potholes are identified by Operators in the Roads Department who open work orders using the municipality’s central asset management system, Cityworks. This figure is followed by citizens' requests through Service Barrie at around 7% with the remainder identified by Road Patrol staff. Therefore, the majority of pothole patches managed within the Roads Department require the coordination of forepersons in the office and crews out in the field. In this regard, the City of Barrie’s challenge was not with potholes themselves, but rather with the management thereof.

The Roads Department’s field crews had used ArcGIS Collector for many years to record repairs. The app has been well received for its intuitive interface and direct access to GIS, helping to speed up the recording component of their job—in addition to helping the City keep its GIS up to date. However, the City of Barrie’s Roads Department found that there were still shortcomings in the workflow. Cityworks, as the central asset management system, was not connected to Collector.

Crews, therefore, had to use Collector to record repairs and then go into Cityworks to find the associated request and close it. “The repairs that were being tracked outside of Collector were not making it back to Cityworks,” notes Alison Kelly, CMMS coordinator at City of Barrie, “At an average of 68 potholes repaired per day, that’s a lot of work that has to be done manually.”

The City of Barrie required an automated system that would connect the mobility of Collector with the asset management capabilities of Cityworks. Such a system would provide a closed loop in which all information related to the identification and repair of potholes could be more easily and quickly managed. In turn, this would enable the Roads Department to patch more potholes per year.

The City of Barrie’s Digital Transformation department and GIS experts explored how best to design and implement a new solution. The first step of this process was to consult all teams involved, which included supervisors and forepersons in the office as well as crews in the field. In fact, they began field testing solutions almost immediately as prior experience had taught them it’s better to iron out such wrinkles sooner rather than later. They were proven right. The first iteration they tested used Cityworks exclusively. However, “The straight Cityworks solution was great for highly detailed work such as inspections but our field staff were already very familiar with Collector,” Kelly points out, “The next obvious solution was to make Collector talk to Cityworks.” 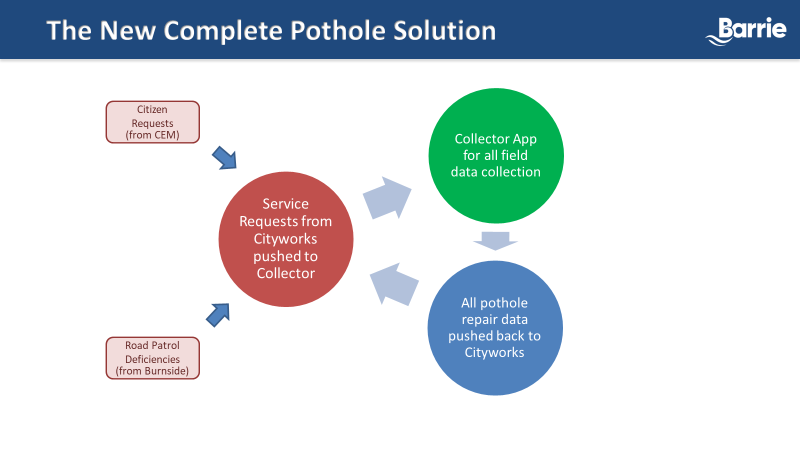 “We’re now using Cityworks to take service requests that come from both citizen requests via Cityworks and the road patrol deficiencies that come from Burnside and send these to Collector,” notes Digital Transformation Manager Rob Emerson, “Collector gathers data on service requests from the field and pushes them back to the Cityworks.” In this way, Collector and Cityworks function as an integrated system enabling Roads Department to open, track and close requests accurately and quickly with minimal burden on the staff carrying out the work, whether they’re in the office or the field. 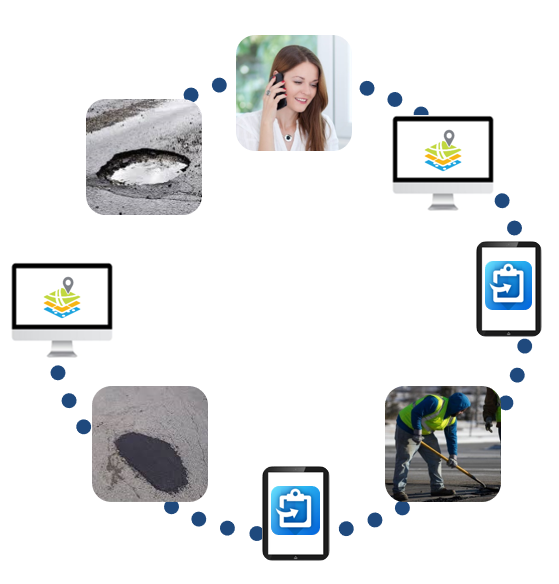 The integrated Cityworks and ArcGIS Collector solution now provides the City of Barrie with a complete connection of data from the initial identification down to the completion of work for tens of thousands of potholes. “We can see for the first time when a specific pothole was repaired in relation to when it was reported and follow that whole chain of data,” Emmerson points out. With this data available, the City of Barrie can calculate key metrics such as average repair time. Further, the new pothole maintenance solution, “allows each component to do what they’re best at,” Emerson observes. It enables the Roads Department to use Collector for high volume, low duration tasks and Cityworks for highly detailed work such as inspections. Further, all the data is in one place and is tied to the relevant road segment, providing clarity for decision-makers. “The Cityworks and ArcGIS integrated solution gives our Roads Department the information they need to identify, perform and ultimately close more work orders and do so more quickly and easily,” said Dave Friary, Director of Operations for the City of Barrie. Friary goes on further, noting that “One of the most valuable pieces of this new solution is our ability to pinpoint the exact day and time a pothole was repaired, which ensures we are meeting the Provincial Minimum Maintenance Standards for Municipal Highways and protects us and the City from litigation.”